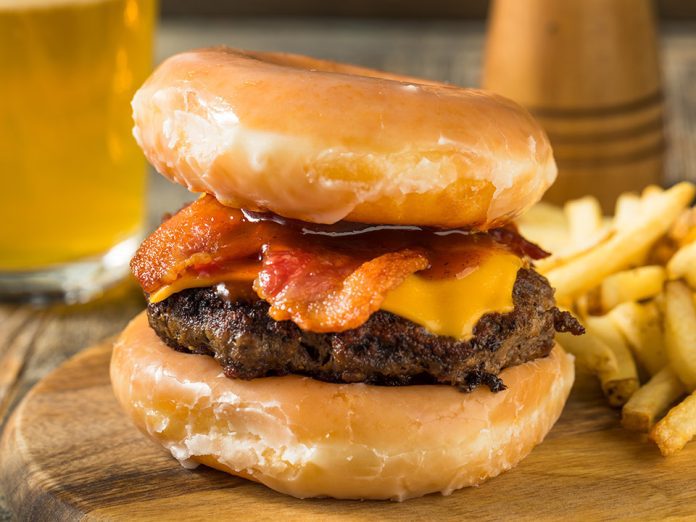 Among the memorable aspects of traveling is the different cuisines we get to experience. Whereas some leave your tongue longing for more, others will make you wish that your stomach never rumbles in hunger. Either way, it is exciting to try different dishes you have never tried before to.

This article touches on some of the most exotic foods in the U.S that will amaze you. If you are an adventurous foodie, this might excite you or help you decide where to draw boundaries. The foods range from a variety of meat to salad, burgers, and more.

The standard salad includes lettuce, vegetables, pasta, fruits, and sometimes meat. Jell-O salad originated from medieval Europe. It is a gelatin dessert with a mixture of salads. Mothers introduced the Jell-O salad in America in the 19th century, where women would encase leftovers in gelatin for preservation.

Hog maw is a Pennsylvania Dutch traditional dish made from a pig’s stomach and stuffed with onions, potatoes, sausage, onions, cabbage, and spices. Traditionally, you could prepare hog maw by boiling, but you could also bake it. So if you love scrapple, you might want to give this one a shot. But if you haven’t, imagine you are eating a piece of stuffed bacon, and you are good to go.

It is also known as Luther burger. The donut burger is a combination of a cheeseburger, and bacon, with donuts for buns. It has both a sweet and sour taste and contains over 1000 calories and 45g of fat. Most people believe that its origin is Georgia at Mulligan’s bar, where the cook would use donuts when hamburger buns were out of stock. What makes it interesting is how the juice from the burger soak into the donut.

Pickled pig feet are pig’s feet soaked in brine. If you are a pickle lover, you might enjoy this. It is some form of preservation where you soak a pig’s feet in vinegar. Then you can boil, roast, or make barbecue.

The strange name alone could discourage you from having this dish. It originates from Rochester around 1918. A garbage plate combines hamburgers, steak, chicken, cheeseburger, sausages, fried fish, or grilled cheese sandwiches—topped with macaroni salad, beans, and fries. There is an additional portion of onions, mustard, or hot sauce. You could serve with butter or white bread on the side to take up the juices after you’ve eaten the food.

This exotic dish that serves both as a dessert and salad is originally from the South. It consists of oranges, coconut, mini marshmallows, mandarin, and pineapples. Other ingredients include cherries, strawberries, pecans, bananas, cottage cheese, whipped cream, and yogurt. According to American cookbooks, ambrosia salad came into existence in the late 19th century.

Just as it reads, this is a combination of coke and peanuts. It involves snacking and drinking simultaneously. The National Peanut Board records that the tradition of pouring peanuts in coke originated from the South in the 20th century. The mixture gives the drink a sweet and salty taste.

Imagine spilling coffee on your food and getting a new dish. Red-eye gravy is also known as Poor Man’s Gravy. It is a mixture of fried country ham drippings and coffee. You could serve with biscuits, fried eggs, and grits.

Frito pie is a junk food dish consisting of cheese, onions, crunchy corn chips, and chili. The origin isn’t clear, but Mexico and Texas both claim its invention. People prepare it in a Fritos corn chip bag. You can find it at gas stations, fast-food sandwich restaurants, or vending machines.

This Alaskan hot dog comprises of sausages made with either beef, pork, or caribou. The sausage is stuffed in a bun with a portion of onions, cream cheese, mustard, ketchup, and relish. Reindeer hot dogs are made and sold in Portland and Denver. 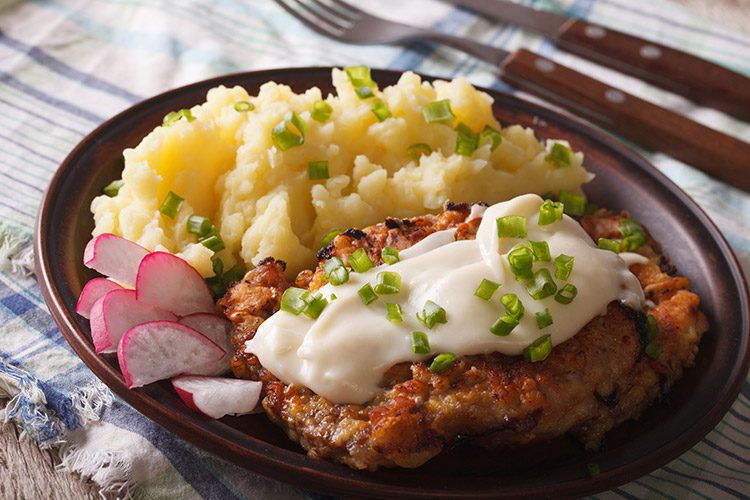 Even though the name bears the name, the dish has no chicken. You will find it in the South, and it contains a thin cut of beef covered in bread. The preparation is similar to that of fried chicken, thus the name. Some believe that the dish got into the U.S.A through German immigrants who would carry an Australian dish named Wiener schnitzel to Texas. The meal was very similar to chicken-fried steak.

If snakes scare you, then this might not be your type of food. Most people find this meal more frightening than exotic. To prepare rattlesnake stew, you will need rattlesnake meat, salt, tomatoes, onions, garlic, and pepper. Then you can fry or smoke depending on your preferences.

Elk burger is an original invention of Montana—a state popularly known for game meat. The dish consists of dark-red elk meat as opposed to beef. It pairs with classic burger buns, which make it delicious. However, elk burgers tend to dry up quickly since they have low-fat content.

Burgoo is a stew-like dish from Kentucky that comprises of vegetables and meat. It would take as long as twelve hours to prepare it in iron kettles over an open fire in the traditional past. The combination of meat varies from pork, beef to chicken. It is paired with a mixture of vegetables such as tomatoes, cabbage, potatoes, corn, and beans.

When you move across the U.S, be sure to explore these cuisines and see which one works for you. It is a great way to participate in an adventure and challenge yourself. And don’t let the names fool you; they could taste better than they sound. However, remember to be cautious if you have a sensitive stomach. Bon Appetit!